Quore: Things we've heard Dad say: Don't throw that out! We can use that!
Today is the longest day of the year. It is called the season of the Midnight Sun in the north Pole as well as in Iceland. Summer is commonly viewed as the season with the longest (and warmest) days of the year, in which the daylight predominates. In the northern latitudes, twilight is known to last at least an hour, sometimes leading to the famous white nights found in St. Petersburg and Scandinavia. 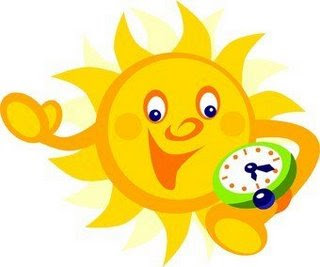 Sol + stice comes from the Latin words meaning "sun" + "to stand still." As the days lengthen, the sun rises higher and higher until it seems to stand still in the sky.
The Summer Solstice results in the longest day and the shortest night of the year. The Northern Hemisphere celebrates in June. The people in the Southern Hemisphere have their longest summer day in December.
Some Fun Facts:
Pagans called the Midsummer moon the "Honey Moon" for the mead made from fermented honey that was part of wedding ceremonies performed at the Summer Soltice.
Ancient Pagans celebrated Midsummer with bonfires, when couples would leap through the flames, believing their crops would grow as high as the couples could jump.
Midsummer was thought to be a time of magic when evil spirits appeared. Pagans often wore protective garlands of herbs and flowers . One of them was a plant called "chase-devil." Today it's the St. John's Wort plant.

The Druids celebrated the day as the "wedding of Heaven and Earth." Today June is believed to be a lucky month for a wedding.

Now that you know all of the above, have a happy Summer Soltice.
Posted by Beverly Stowe McClure at 1:28 PM