Quote of the Week: God could not be everywhere and therefore He made mothers. Jewish Proverb

My theme for the month of May is mothers, grandmothers, aunts, and other women who have influenced our lives. Today I'm sharing a little about my mother. If you're so inclined please tell us about your mom or grandmother or aunt or sister or whoever you look up to as a mentor and friend. 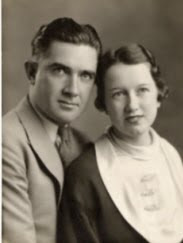 Henry Audra and Lorena (Leona) Adele Chapter Young Stowe
Leona Chapter was born July 10, 1912, in Brooklyn, New York. Her family lived in a tenement apartment on Gates Avenue. In 1919, Leona's mother died of tuberculosis, and her father surrendered her to the Children's Aid Society in 1921, she was placed in an adoptive home in Brooklyn and returned in December when it did not work out. She lived at the Brooklyn Industrial School for Homeless and Destitute Children until January, 1922, when she rode the train to Bowie, Texas. Although she did not know it, and neither did I until many years later, from 1854 to 1929, between 200,000 and 250,000 children were sent "west" to new homes and new lives. These trains became known as the Orphan Trains.
All of the children that traveled west were not true orphans. Many were half-orphans, like Leona, who left behind two brothers and three sisters, as well as her father. Fanny and W. V. Young became Leona's foster parents. They changed her name to Lorena and gave her a very good home. A year after Leona's arrival, the Youngs sent for Mildred, her baby sister.
I have recently sold Lorena's story to Twilight Times Books. No publishing date yet, but will post when I have one. I took a lot of liberties with the story, since I know so little about her early life, the train ride, and life on the farm as opposed to the big city.
I have read almost every book written on the subject, bcause the story of these children is dear to my heart.
Who else would like to share your story?
Posted by Beverly Stowe McClure at 4:19 PM