New information about my YA historical novel, Caves, Cannons and Crinolines. The release date has been set: June 15, 2010. The book is available for pre-order at Barnes and Noble., at a big discount. 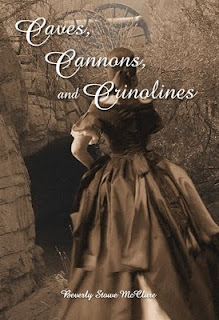 A little about this story: One summer we visited Vicksburg, Mississippi, and toured some of the old Victorian homes that were standing during the Civil War. We also drove through the military park where monuments stand, dedicated to the many soldiers, both northern and southern, who fought and died there. They also have a super museum that's located in the old courthouse and dates to the war. Pictures, old clothes, and books, of course. One of the things that interested me most was the stories I heard about the people living in caves during the siege of Vicksburg. And I knew I had to tell their stories, their fears, their thoughts, and how they survived. My characters are purely fictional, though some familar names of real people are mentioned. And some not so familiar. But that's a different story.