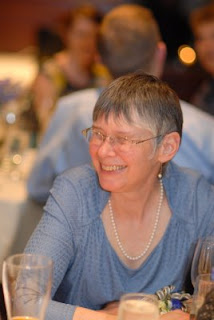 Penny Lockwood Ehrenkranz has published more than 75 articles, 50 stories, two e-books, a chapbook, and her stories have been included in two anthologies. She writes for both adults and children. Her fiction has appeared in numerous genre and children's publications and non-fiction work has appeared in a variety of writing, parenting, and young adult print magazines and on line publications. Penny granted me the pleasure of interviewing her recently. Here's what she has to say.

Bev: When did you discover you wanted to be a writer?
Penny: I can't remember a time I didn't want to be a writer. My father used to make up stories for me when I was a child, and I was always fascinated by them. I guess that made me want to tell stories too. Like many writers, I started as soon as I could spell. I used to write my own stories, illustrate them, and bind them. I still have some of them my mom saved for me. In high school, I convinced my English teacher to let me write a novel instead of doing homework. After graduation, I started submitting stories, but I didn't have a clue what to do. Back then, there wasn't such a terrific support system for new writers like there is now. After a few rejections, I decided I probably wasn't as good as I thought I was and gave up for too many years. In 1993, I took a writing course through The Children's Institute of Literature and finally had success. Since then, I've had numerous articles and short stories published including in two anthologies.

Bev: What was your inspiration for your children's book, Ghost for Rent?
Penny: A neighbor got divorced and moved into an older home when the house she was living in was sold. Shortly after she moved in, she and her children heard music and said they saw what appeared to be a young boy playing piano. The area in which I live has many such tales, and I was intrigued by the idea of telling a ghost story for young people. At the time, I had written and published quite a few articles and short stories for adults, but my own daughter didn't think I was a writer because I hadn't written a "book." I decided to write one, and Ghost for Rent was the result.

Bev: Do you outline a story first or just start writing and let the characters take you where they want to go?

Penny: I have never outlined, except when I had to for school reports! I always just start writing and then let my characters take over. Most of the time, I can close my eyes, and it's like watching a movie playing in my head. Sometimes, the characters have a different idea of what they want to happen and then I have to change gears. When I start a novel, I have a vague idea of what I want to write in each chapter, but that often changes.

Bev: Tell us about your other work and future plans.
Penny: As I said, I do write a lot of non-fiction as well as fiction for adults. My non-fiction is mostly writing-related articles, parenting articles, and teen self-help. My fiction leans toward fantasy and soft science fiction with a little bit of romance thrown in. Several years ago, several of these stories were compiled and published as an anthology, Then and Later. Unfortunately, the eBook publisher went out of business, and I haven't yet tried to find another publisher. Not too many publishers are interested in anthologies. I also have an illustrated young adult chapbook, Dragon Sight.I would love to write travel articles, and have written a couple, but so far haven't had any acceptances. The other market I would like to crack is for retired and senior citizens. I am also working on a sequel to Ghost for Rent as well as a picture book for toddlers.

Bev: Just for fun: If you could live in any other time period, when and where would you choose? Why?
Penny: Oh, I would love to live in a fantasy land with magic, elves, fairies and dragons. But since that's not possible, I guess right now is a good place to be. While I love the idea of living in the past (middle ages), it would be an incredibly hard life, and I have to admit I would miss all the technology and time-saving devices (imagine washing clothes in a river with a rock). To live in the future would also be appealing; except at the rate we're damaging our planet, I wonder what will be left of Earth in 100 years. I'm quite happy with my life right now. I have a supportive, loving husband, two wonderful children (who both married delightful partners), and a beautiful grandchild. What's not to love about that?

Bev: What is your favorite movie, TV show, book? Your favorite author and actor/actress?
Penny: My favorite movie would have to be Crouching Tiger, Hidden Dragon. I love the martial arts scenes and flying through the bamboo forest. The last time I was in China, we actually visited the area where it was filmed. It was breathtaking. My favorite TV show would be The Dresden Files, which unfortunately was canceled. It's hard to pick a favorite book as I love Jim Butcher's Dresden File series, but I also enjoy reading J.K. Rowling, George R. Martin, Tolkien, Terry Brooks, Anne McCaffery. . . you get the picture. I don't think I have a favorite actor or actress. I like Jet Li, Sean Connery, Fred Astair, Brad Pitt. As for actresses, I've always liked Julia Roberts, Julia Stiles, and Drew Barrymore. There's others, of course, but that's a good list.

Bev: Where can your fans learn more about Penny Lockwood Ehrenkranz? Web sites? Blogs?
Penny: I don't have a web site yet, although I realize it would be an advantage to do so. One of these days... My blog is at http://pennylockwoodehrenkranz.blogspot.com/ If people are interested in purchasing either Ghost for Rent or Dragon Sight, here are a few places where the books are available for sale:
Sites where the book can be purchased:
Ghost for Rent:http://www.hardshell.com/ProductInfo.aspx?productid=0759910057 (trade paperback)
http://store.fictionwise.com/servlet/mw?t=book&bi=8656&si=42http://ebooks.ebookmall.com/ebook/114776-ebook.htm http://ebookstore.sony.com/ebook/penny-lockwood/ghost-for-rent/_/R-400000000000000123759
http://www.ebooks.com/ebooks/book_display.asp?IID=225738
http://www.diesel-ebooks.com/cgi-bin/item/parent-9780759903371/Ghost-for-Rent-eBook.html
https://secure.ereader.com/servlet/mw?t=book&bi=8656&si=59
http://www.amazon.com/Ghost-for-Rent-ebook/dp/B000FCKHD8/ref=sr_1_1?ie=UTF8&s=books&qid=1241740187&sr=1-1Dragon Sight:
http://www.genremall.com/fictionr.htm#dragonsight
Bev: Thank you for sharing your world with us.
Posted by Beverly Stowe McClure at 7:31 AM