Bruce Atchison, Guest Author at Write What Inspires You! 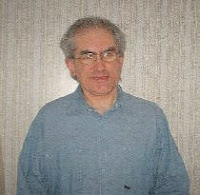 Join Donna McDine today at http://www.donna-mcdine.blogspot.com/ when children's author, Bruce Atchison, joins Donna as her guest author.
Bruce Atchison, a legally blind writer, has written scores offreelance articles since 1996. Their topics ranged from a visit to the Voice of Russia World Service in Moscow to a hilarious April Fools joke played on his class by his grade 3 teacher. Bruce's articles have appeared in an eclectic mix of publications, from glossy magazines to photocopied underground "zines."
He has also written 2 books. When a Man Loves a Rabbit (Learning and Living With Bunnies) relates his adventures and misadventuresof having rabbits as house pets as well as the fascinating facts he learned about them. It was published in 2006. A year later, he wrote Deliverance From Jericho (Six Years in a Blind School). it's his memoir about what it was like to be sent 500 miles from home for months at a stretch, beginning when he was 7 years old. Bruce is currently working on How I Was Razed (and How I found Authentic Christianity), an account of his spiritual journey through various betrayals of his faith to the eventual discovery of what genuine Christianity is. He lives in a tiny hamlet in the western Canadian province of Alberta with 4 house rabbits.
Posted by Donna McDine at 12:06 PM