Lea Schizas has awarded my blog this awesome award. This is the second time, and I am truly honored. See more about Lea at http://thewritingjungle.blogspot.com/
There are so many great blogs out there that it is difficult to pick just a few, but here are my choices for the Brillante Weblog award.


Rules for next recipients of the Brillante Weblog Premio are as follows:

1. The award may be displayed on a winner's blog.

2. Add a link to the person you received the award from.

3. Nominate up to seven other blogs.

4. Add their links to your blog.

5. Add a message to each person that you have passed the award on in the comments section of their blog.

Looking forward to seeing what other wonderful blogs we can visit.
Posted by Beverly Stowe McClure at 9:23 AM 4 comments:

Lost in the Fog

Daniel Chase, member of the critique group I'm in has a new book out. Here's a little about it. 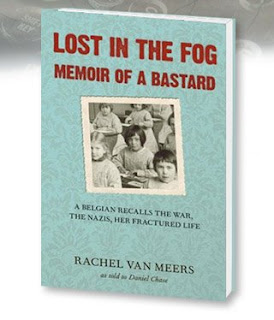 LOST IN THE FOG: MEMOIR OF A BASTARD
Rachel Van Meers as told to Daniel Chase

“You should never have been born. You’re nails in my coffin.”

In her memoir, Lost in the Fog: Memoir of a Bastard, Rachel Van Meers tells Daniel Chase what life was like for her as a child, born in a home for unwed mothers in Ghent, Belgium, 1930, to her present day life in the United States. Using Rachel’s own unique voice, Daniel relates her life with a tender story that will make the reader laugh, cry, and cheer for this unlikely heroine.

Considering her experiences with a mother who not only verbally abused her by saying things such as the opening statement, but sometimes even hitting her, and leaving Rachel mostly to her grandmother, a strict and religious woman, to raise, Rachel could well have become a bitter child and woman, yet her attitude remained positive, for the most part. She loved her mother, Helene, simply because she was Helene’s daughter. She loved her grandmother and adored her grandfather.

Rachel survived the advances of her stepfather and a child labor camp in Germany. Her health was bad and she sometimes wondered where she would live, but when she was older she worked hard at many different jobs to support herself. She believed in miracles and tells us of the miracles that occurred in her life. Rachel is an inspiration and a wonderful role model for young women, men too, to follow when faced with the cruelties that life sometimes brings.

This would make a great book for high school history classes, college courses, and for everyone who enjoys stories about history and war.
Posted by Beverly Stowe McClure at 3:23 PM No comments:

I am delighted and thrilled to share with you that my cover letter and bibliography for my non-fiction article entitled, "Fishing Through A Frozen Pond," (to be published in Boys' Quest Magazine) has now been accepted as samples for the 2009 publication "Magazine Markets for Children's Writers" issue.
Posted by Donna McDine at 11:13 AM 1 comment:

What a great way to start the week. Donna McDine has awarded me the Brillante Weblog Premio - 2008 Award. I am truly honored. Donna is a wonderful friend who writes book reviews, interviews writers, and does so much more. Her blog Write What Inspires You contains inspiring and interesting information. Stop by and visit her sometimes. You'll be glad you did. Thanks, Donna, for this honor.

As recipient of the award I'm to nominate other inspiring blogs. So here are some of my choices. There are many more, but I wanted to share these with you.

Rules for next recipients of the Brillante Weblog Premio are as follows:

1. The award may be displayed on a winner's blog.

2. Add a link to the person you received the award from.

3. Nominate up to seven other blogs.

4. Add their links to your blog.

5. Add a message to each person that you have passed the award on in the comments section of their blog.

Posted by Beverly Stowe McClure at 11:22 AM 3 comments:

I'm delighted to share with you that my article, "Sports Buddies," has been accepted for publication to Hopscotch For Girls Magazine. The article will appear in the April 2014 issue.
Posted by Donna McDine at 2:04 PM 1 comment: 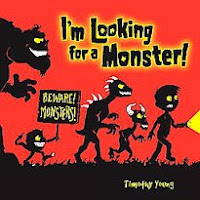 Cruise on over to The National Writing for Children Center - http://www.writingforchildrencenter.com/ and read my book review on:
Title: I’m Looking for a Monster
Written & Illustrated by: Timothy Young
Hard cover: 14 pages
Ages: 4-8
Publisher: Random House Children’s Books
ISBN-13: 978-0-375-84416-4
Publication: July 2008
While you are there, be sure to check out all valuable information.
Posted by Donna McDine at 10:05 AM No comments:

Another Stories for Children Magazine Article 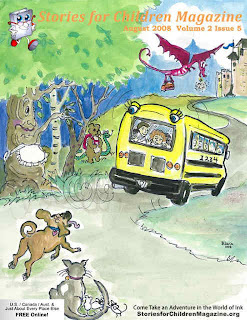 This is so much fun. My article "How Does Your Daddy Carry You?" is in the August 2008 issue of Stories for Children Magazine. I'm honored to be included with so many other neat stories and articles. Take a look when you have the time.

Can you see yourself sitting there with a writing pad and your favorite writing pen? I can! Let your inspiration hit...even if you have to close your eyes and imagine this scene.
Today my girls are away with friends and my husband is working. I've used this day to my advantage in several ways. Since we are under construction with our kitchen expansion/renovation I don't feel compelled to clean my house. And for many of you that know me, know that I love to keep a clean house.
To have the house to myself with no interruptions made it a great opportunity to catch up critiquing fellow writers' manuscripts from my critique groups, typing up the draft of a manuscript that I plan to submit to Pockets in conjunction with the Pockets Challenge posed by Lea Schizas at the Muse It Up Club. I look forward to fine-tuning the manuscript and submitting it to one of my critique groups for feedback, updating and inviting friends to JacketFlap, and blogging.
Also, at the encouragement of two fellow writer's I have finally written (actually typed) down my goals that I strive to meet and breaking them down into daily, weekly, and monthly time frames. I find immense satisfaction is checking off my accomplishments as I meet them. It gives me the extra re-enforcement to keep moving forward and that yes, even though an acceptance hasn't come in recently I am truly moving forward.
What inspires or organizes you to keep moving forward? I'd love to hear all about it.
I'm off to check off another item completed...blogging!
Here's to your inspiration!
Posted by Donna McDine at 9:26 PM No comments:

Agent Search and "Hi" from Rebel 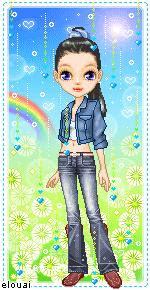 To date I've sent twenty agent queries, both email and snail mail. Eleven have responded. My batting average so far is zero. I may start querying publishers soon. Hey! I've done it before and had better response. I know, patience, patience.

Oh, Rebel says to tell everyone "Hi." She's still waiting for the big day her book comes out. In the meantime she's playing around on the computer. She found a doll that looks just like her. Well, almost.
Have a cool weekend.
Posted by Beverly Stowe McClure at 2:18 PM 2 comments: