A Word from Cleo

Since Lucky started this telling our stories, I’ll add mine. My girl, Rebel, calls me Cleopatra, Cleo for short, which was the name of Egyptian queens and princesses in Egypt, way back, long before I was born. What can I say? The name fits. I am beautiful and intelligent.
A word about my girl here. I’ve been her owner since I was a kitten. She found me in an old barn somewhere and brought me home with her. Even though she’s a human, she’s very nice, feeds me my favorite food–tuna fish. She knows who runs the house, too. Me. I like a soft pillow to sleep on. She gives me the softest one in the house. I like my chin rubbed, but leave my tummy alone. She does the best chinny rub you’ve ever seen.
One thing she and I disagree about though, and I’m working on this to show her my side of the story. Why does she like smelly, noisy dogs? They scratch and slobber and yap so that a cat has little peace and quiet. And then there’s that annoying hawk. Its little beady eyes watch me, like I’m its dinner or something. It does provide some entertainment. I like to sit on top it its cage and tease it. Rebel says I shouldn’t do that, but a girl has to have some fun.
So to close, let me say, Rebel is coming along nicely in learning my likes and dislikes. Time for my nap now.
Posted by Beverly Stowe McClure at 1:34 PM No comments:

Cruise on over to The National Writing for Children Center - http://www.writingforchildrencenter.com/ and read my book review of:

Lessons I Learned from the Ants 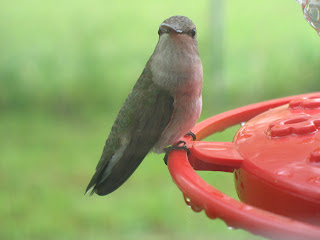 For days I’ve been battling ants that are determined to take over my hummingbird feeders. The sugar water draws them in. If ants can think, their brains are saying, “Yummy, yummy, my favorite food.”
I’ve spread Vaseline on the windows around the suction cups that hold the feeder to the glass. That works for about two seconds before a brave, adventuresome ant finds a small path through the sticky mess and once again dines on sugar water. So I spread the Vaseline again, hoping to cover up that one tiny entrance. Ah! Good! It worked. For another two seconds. Then an ant, to prove that it’s smarter than I am, marches right through the barrier.
Okay, this clearly isn’t working, so I go on the Internet to see what other people do about the ant problem. I get conflicting advice. Use Vaseline or Vicks Vapor Rub. (Tried that, doesn’t work.) Don’t use Vaseline because the bird may rub against it and then can’t groom itself and might die. Oh! Great! Now I’m a bird killer. Other suggestions are bay leaves, terro liquid, and olive oil. None of them sound much better, and they’re all meant for feeders hanging under trees, which mine are not. There is an answer somewhere. I just haven’t found it yet. I will keep on, though, because I have to prove to those ants that I’m as smart as they are. Or until the ants’ tummies are so full they can’t drink another drop.
In the meantime, I see a parallel to my writing career and to life in general: persistence. Those little insects, barely bigger than a grain of sand, are persistent. They have a goal, and they will sacrifice anything to reach that goal. Now I don’t recommend being that drastic. I don’t want to end up drowned like most of the ants do. But if I want something badly enough I can set my goals and do everything possible (legally) to reach those goals. Think of the ants. They let nothing stand in their way. I should not let bumps in the road that steer me off course detour me, either. If my goals are worthwhile then give them my best efforts. I may not always succeed, but at least I’ve tried, and I can learn from each experience and choose another road to follow, one that perhaps is better than the previous one.
Who would have thought that those pesky ants could teach me a lesson? Persistence. They have it. I want it. At the moment the ants are winning.
By the way, if anyone has a good solution to keeping ants away from feeders, please let me know.
Posted by Beverly Stowe McClure at 8:45 AM No comments:

Hello All...cruise on over to The National Writing for Children Center - http://writingforchildrencenter.com for Children’s Book Review Week:

Screwball by Keri Mikulski and reviewed by Suzanne Lieurance

The Rabbit and the Snowman by Sally O. Lee and reviewed by Donna M. McDine

Be sure to check back all week long to read more reviews.
Posted by Donna McDine at 9:47 AM 3 comments:

A Word or Two from Rebel's Pets

Rebel’s been writing about me in her diary Rebel in Blue Jeans so it’s only fair, I get to write about her too. Just because I’m a dog doesn’t mean I can’t tell my side of the story. So here goes.

I was minding my own business one day, playing with my rubber ball, tossing it in the air, chasing it, just being a typical puppy, when my owner picked me up, put me in the car, and said we were going for a drive. I yapped my gratitude cause I love to ride in the car. Or I used to. That day was different though.

I stuck my nose out the window and snapped at the wind blowing in my face as the car zoomed along. Instead of going to the bank though, where the teller always gave me a milk bone which I loved, we drove way out in the country. There wasn’t a house in sight.

Mmm. I thought we were playing a new game, so I wagged my tail in excitement.
Then my owner pulled the car off the road, opened the door, and set me on the ground. I waited for him to get out of the car to see what the new game was. But he closed the door and drove away. I ran after him for a short distance, but my legs got tired and I had to stop. Nobody told me the middle of the road was a bad place to rest, but I soon found out.

This car zipped around the corner and before I could move I felt a horrible pain in my back and leg. I whined that I was hurt. But the car kept going. I couldn’t walk so I just lay there in the road. The sun was hot. I was thirsty. Another car went by, but didn’t stop.

Then the sky started to get dark. I heard some weird noises. I wanted my nice soft bed in my house. They’d come back for me now. I waited. But they didn’t come back. Then this pickup drove past, stopped, backed up. A girl got out, picked me up, and told the boy driving the pickup the vet’s office was closed, but she’d fix my leg. She said she thought it was broken, whatever that means.

They took me to her house, and Rebel–she told me that was her name and the boy called her Rebel–put a splint–another of her words on my leg–gave me something she said would make me feel better, along with some food that was pretty good even though I wasn’t too hungry. The boy, Will, left, but Rebel stayed with me all night, after calling her dad on a cell phone–she told me that’s how she talked to people who were somewhere else–and telling him where she was.

Her dad even came to her animal hospital and scratched my nose. I like him.

Anyhow, Rebel doesn’t know how I got on the highway, and I can’t talk people talk to tell her, but she gave me a home and a new name: Lucky. I like it, and I’m happy happy.

So now you know my story.

Next time we can get hold of Rebel’s diary, Cleo wants to write in it. Ha. You didn’t know animals could write did you. It’s hard since we don’t exactly have fingers like humans, but we’re pretty smart.

Cross & Quill ~ The Christian Writers Newsletter
My byline and synopsis of my article entitled, "5 Tips for Researching Children's Stories Market Potential," has been announced on the the CWFI website: http://www.cwfi-online.org/ for the July/August 2008 newsletter.
Visit CWFI today to learn about this organizational newsletter.
Posted by Donna McDine at 8:13 AM No comments: 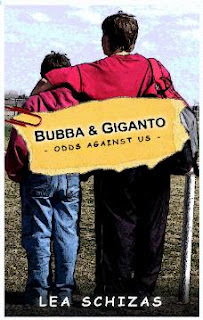 BUBBA AND GIGANTO: ODDS AGAINST THEM
Review

Lea Schizas has written another page turner. Once I started reading about Bubba and David, AKA Giganto, I couldn’t stop. Before I knew it I’d read the whole story. I’m so glad I did.

Bubba (yes, Bubba, not Bobby or Brendan) Jacobson, tough guy, smart mouth, sensitive heart, and David (Giganto) Montana, nice guy, picked on by bullies, big and clumsy, are the least likely of friends. But when they meet on the first day of ninth grade a remarkable friendship is formed.

This is Bubba’s first year at Pierson High, and he’s delighted to discover they have a soccer team. Questions arise, however, when Bubba and David try out for the team. Why does Mr. Ambrose, the gym teacher, tell Bubba not to push David (Giganto) into something he doesn’t want to do? What is the secret about the boy who died during a soccer scrimmage the previous year? Is David (Giganto) connected to the tragedy? And why is Jason, all-star athlete with an attitude, so determined David doesn’t make the team?

Ms. Schizas is a master at surprise endings. Just when you think you know all the answers, she changes the questions with an unexpected twist or two. I never saw this one coming.

Themes of bullies, soccer, friendship, and forgiveness are woven through this short story, making it one boys can relate to and will enjoy reading. I recommend it for reluctant readers, children who perhaps are facing their own bullies, and also for sports lovers and everyone who enjoys a fast-paced book with continuous action.

"Mothers Hug, Mothers Kiss," my article for young readers, is published in the July issue of Stories for Children Magazine. Check it out if you get a chance.

You'll find lot of neat stories and articles there this month.
Posted by Beverly Stowe McClure at 9:31 AM 2 comments:

Continuing Saga of an Agent Hunt

I took a week off to have fun with my family who came for a visit. The week was way too short. They left way too early. And I miss them already. But back to the daily writing and reading and querying.

So this week, back to the keyboard and the Internet in search of the "perfect" agent for my story.

Have a great week, everyone.

Happy reading and writing.
Posted by Beverly Stowe McClure at 9:12 AM 1 comment: