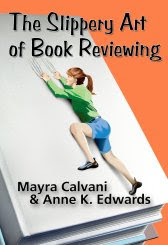 June is ‘Book Reviewing’ month at Blogcritics Magazine! To promote the release of The Slippery Art of Book Reviewing, co-author Mayra Calvani will be interviewing 15+ reviewers and review editors during the month of June. Learn all about the business of book reviewing and what’s in the mind of some of the most popular reviewers on the internet today. Some of the guests will include: Alex Moore from ForeWord Magazine, James Cox from Midwest Book Review, Irene Watson from Reader Views, Andrea Sisco from Armchair Interviews, Magdalena Ball from The Compulsive Reader, Sharyn McGinty from In The Library Reviews, Lea Schizas from Muse Book Reviews, Linda Baldwin from Road to Romance, Hilary Williamson from Book Loons, Judy Clark from Mostly Fiction, and many others!
To see the complete lineup, visit: The Slippery Book Review Blog.Between June 1st and June 30th, stop by Blogcritics and leave a comment under the reviewer interviews for a chance to win a Pump Up Your Book Promotion Virtual Book Tour (coordinated by book marketing guru Dorothy Thompson), OR, as an alternative to a non-author winner, a $50 B&N gift certificate!
Mayra Calvani
http://www.mayracalvani.com/
http://www.violinandbooks.wordpress.com/
http://www.thedarkphantom.wordpress.com/
http://www.thefountainpennewsletter.blogspot.com/
Children's Books:
http://mayrassecretbookcase.com/
http://mayrassecretbookcase.blogspot.com/
Posted by Beverly Stowe McClure at 11:04 AM 2 comments: 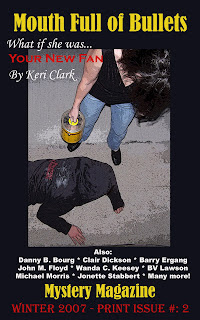 Kim is best known for her contributions to the writing world as the admin of Writers4Writers.com, a place created with the sole purpose of helping other writers find a place to nestle in and make friends. When the site grew large enough to make it on its own, Kim went solo and began her own ventures into the world as a writer.
Kim has since published a number of short stories at such places as Gryphonwood Press, Micro Horror, and Long Story Short. Recently, her first short story using the characters from her book, AVENGING ANGEL, came out at Mouthfull of Bullets. You can purchase your copy of the magazine at : http://www.mouthfullofbullets.com/.
In 2008, Kim will have three more shorts coming from MOB including another Shannon Wallace story.
Kim is a member of Sisters in Crime.
Look forward to the whole "Angel" series as you plan your book buying for the future as Kim has more adventures planned to come.
The above magazine is the cover of Winter 2007 issue where Kim's story can be found.

The Christmas Heist is now available at http://www.mouthfullofbullets.com

BLURB: SHANNON AND DWAYNE FIND MORE THAN JUST STOCKINGS AT THE LINGERIE COUNTER DURING CHRISTMAS

There's more:
Avenging Angel is a novel set in a fictional town called South Lake, Mississippi. It is a combination of two towns around me. They both make up the northwestern corner of the state and believe me, it's growing.

My main character, Shannon Wallace, lives here as far as my poor brain will let her.

Posted by Beverly Stowe McClure at 2:00 PM No comments:

We finally heard from our granddaughter who is teaching in China. All of the volunteers in her area are safe. She's in Changsha, to the east of the earthquake area. She said her students noticed that everything in the classroom was swaying. They didn't know what had happened at first. I cannot imagine what those poor people are going through. My prayers are with them and those heroes who are rushing to their aid.

This week has started out of focus. I'm a very scheduled person, I guess because of all those years I was a teacher. When extra things come up now, it takes me awhile to get back in the normal routine. Monday, which is usually a writing day, was spent at our district retired teachers meeting. It was interesting, and the food was delicious, but now I must get back in the groove and write.

E-mailed one magazine submission this morning. Then worked on my mg wip. I'm stuck on this chapter. Will get it though. I'm still working on a synopsis for my YA story that I hope to mail later this month or in June. Why is the synopsis so hard to write? At least for me it is. Remind self: never give up.

I'm reading some awesome books. Will talk about them later.

Have a great week everyone.

In the second drawing for Listen to the Ghost, Sharon is the winner. She entered through email since Google wouldn't let her post here. Congrats, Sharon. You book will soon be on its way.

Have a wonderful day, everyone.

Happy reading and writing.
Posted by Beverly Stowe McClure at 9:38 AM No comments:

Katie, or anyone who knows Katie's email, please contact me. I'm ready to mail your book and Cindy's, but need an address. My email is Beverlysmcclure @ aol . com. You have until midnight tonight or I'll draw another winner.

Thanks.
Posted by Beverly Stowe McClure at 8:31 AM No comments:

Patches looks the entries over. 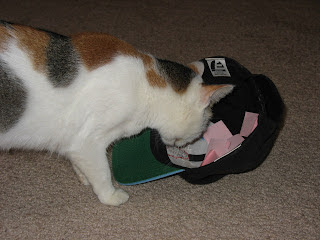 She doesn't like them in the hat, so I put them on the floor. She has to rest a minute. 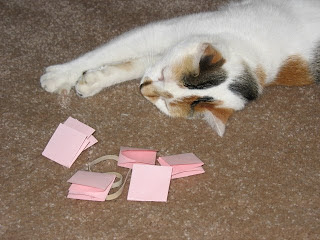 She finally chooses the two winners. 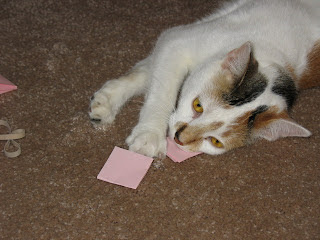 Katie has won a paperback copy of Listen to the Ghost

Cindy has won a paperback copy of Secrets I Have Kept.


If you'll e-mail where you'd like me to send your books, they'll be on their way.

Leave out the spaces and you've got it. Please put book winner in the header. Thanks.

Oh, and don't despair if you were not a winner this time.
I'm keeping the names for later this summer or fall when Rebel in Blue Jeans comes out.
I'll be giving away copies and your names will be entered.

Have a great weekend everyone.

Posted by Beverly Stowe McClure at 11:59 AM 4 comments:

Your names are written on Post it notes, and Patches, my cat, will choose. Whichever papers she decides are good for eating will be the winners.

Good luck. And thanks, everyone, for your nice comments.
Posted by Beverly Stowe McClure at 7:44 AM No comments: