First, I am terribly embarrassed.

I was so excited to be a part of Dave Cole's tour for his latest novel THE WINDOW. Well, my brain sometimes takes a holiday, and I am late with my post. But you have to read this, the reason he decided to write THE WINDOW. Enjoy.

Why I Decided to Write The Window

I’ve written seven books. Six were part of series called The Math Kids. Those books were well thought out prior to writing, carefully plotted, with clear ideas on individual story lines which seamlessly fed an overarching series theme. Care was taken with crafting the characters, with character arcs planned over multiple books. I had, as they say, planned the work and then worked the plan.

And then there was The Window. That one had no planning, no firm plot, and no idea how it was going to end. I probably broke every rule on how to write a book, but somehow it was also maybe the best way to do it. It started with a two second audible inspiration. I was working in my office when I heard a screech of brakes. I immediately looked out the window, but I wasn’t quick enough to see what had actually happened. There was a car and a kid on a bike. That much was clear. There had probably been a near collision, but that was speculation on my part.

I went back to my work, but that unwitnessed scene stuck in my head. How close had the car come to the bike? Was it going fast enough to have seriously hurt, or even killed, the child? I thought about it all day, and while I drifted off to sleep that night, my mind wandered back to the incident. More questions came: What if I had seen the kid riding in the middle of the street prior to the near accident? Would I have thought to have warned him? Given more time, would I have stopped the driver and told him to watch out because kids sometimes rode their bikes right down the middle of the road? Those questions led to a more random thought. What if I had a portal to the future, a magic window which would allow me to see what was coming? What would I do with it?

That was it. That was all I had when I sat down at my keyboard. A magic window to the future. What I didn’t realize at the time, and still didn’t until I typed the final few pages, was that the future might not always be something I wanted to see. What if I couldn’t change events for the better? What if I was stuck knowing that bad things were coming whether I liked it or not?

I worked on The Window over the course of a year or so. Some days I knocked out a couple of thousand words. Other days I just read the story that was unfolding. As a reader, I wanted to know where it was going, but as I writer I still wasn’t sure. And so it went, writing and reading until I finally saw where the story had to go. I couldn’t have told you the ending even a week before I finished. As a writer, the lack of planning was risky, but as a reader it was oh so satisfying.

So back to the originl question: why did I write The Window? I think Stephen King said it best when asked in an interview why he wrote horror stories. “What makes you think I have any choice?” he answered. I wrote The Math Kids series with a purpose. I was in complete control from beginning to end. But with The Window, the story took over and didn’t give me any choice. 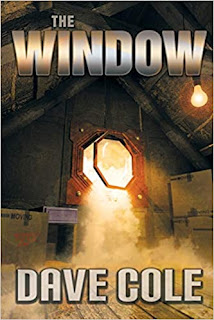 Posted by Beverly Stowe McClure at 9:15 AM 8 comments: 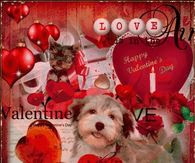 Posted by Beverly Stowe McClure at 8:44 AM 9 comments:

We post the first Wednesday of every month. We should try to visit at least a dozen new blogs and leave a comment. Our words might be the encouragement someone needs.

The awesome co-hosts for the February 3 posting of the IWSG are Louise - Fundy Blue , Jennifer Lane, Mary Aalgaard, Patsy Collins at Womagwriter, and Nancy Gideon!

February 3 question - Blogging is often more than just sharing stories. It’s often the start of special friendships and relationships. Have you made any friends through the blogosphere?

In Honor of Jo Wake 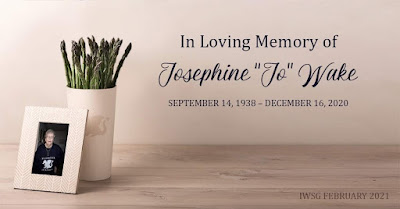 HOW TO ENTERTAIN YOURSELF ON A BORING DAY

Well  first make sure someone is watching. It's no fun to play by yourself. So look in the kitchen patio door and be sure your mom is there. She is and smiles at you.

Now that you have her attention, get busy. Grab a planket out of your doghouse. It smells kind of doggie so it needs airing out. Run with it to the back yard then go back for another blanket. Make sure Mom sees you on the patio.

She does and smiles at you. Take another blanket out to the yard and let her know.

So she looks outside and frowns. "What are you doing?" she asks you.

You nod your head and bark, wanting her to come see. By this time all five blankets are scattered around the yard.

Now, Mom is pretty sharp and she knows what you want. So, she gathers the blankets up, two at a time and throws them over the chain wire fence so they can get rid of the doggie odor and warm up a bit. She smiles when the blankets are all hanging on the fence. The wind is almost blowing them away, but she watches close.

And Happy lies down on the grass to take a nap. Showing Mom what he wants her to do is tiresome. Soon his eyes close and he's dreaming of what he'll have to eat for supper. 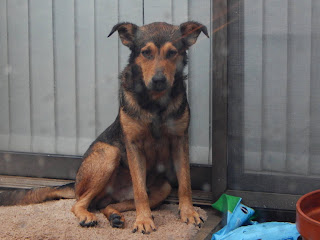 And it works. My blankets are all soft and good smelling now.